In the summer of 2021, Communication agency 4D implemented the project of the virtual camp Easy Breezy Virtual Camp for the online platform for learning English. Event was organized for children. The project was implemented on a turnkey basis from the idea creation stage. For 7 weeks from July 12 to August 29 children enjoyed cartoons in English, lessons with native teachers and useful master classes - absolutely free anywhere in the world.

The project team faced several tasks at once that required a comprehensive solution:

Translated from English, Easy Breezy means "easier than simple". This is an easy and memorable phrase. But, more importantly, it reflects the essence of the project's message to the target audience. "Learn new things and have fun", "boring English lessons" - for children. "Summer with benefits", "to occupy the child with useful and interesting things", "holidays that will definitely be remembered" - for parents.

The lessons of each week of the camp were on a specific topic. First of all, the topics had to be interesting and accessible to children of all ages. As a result, our team settled on 7 options: "Hobbies", "Music", "Sports", "Culinary skills", "Professions", "Animal World" and "Travel".

The lessons were recorded: each lasted no more than 25 minutes to preserve the interest and concentration of the child and was conducted by experienced native teachers who work at Novakid. For new participants, Easy Breezy was a good opportunity to get acquainted with the training techniques used at Novakid.

In addition, the project team reviewed more than 150 different workshops for children and selected 21 best videos as a result. All master classes also had to correspond to the themes of the week, not be too complicated and not require a large amount of improvised materials.

Animation Festival: a guide to the world of animation

The festival of animated films in English has become the main "feature" of the camp.

The selection of cartoons was handled by the curator. The works had to correspond to three age categories: 4-6 years, 7-9 years and 10-12 years. Have a timekeeping from 3 to 30 minutes and English voice acting. Based on these requirements 35 cartoons were selected in a variety of animation techniques from directors from the USA, Great Britain, Ireland, Australia, New Zealand and other countries. Among them are participants and laureates of prestigious world festivals. For example, BAFTA Scotland and Annecy International Animated Film Festival.

With copywriters and translators, the cartoons received English subtitles, short descriptions and trailers. To display content on the platform, a player with anti-piracy features and the possibility of geo-blocking has been introduced.

The legendary Soviet and Russian film studio Soyuzmultfilm became a partner of the festival. The program of the camp included selected episodes of five animated series of the studio: "Zebra in a cage", "Orange Cow", "Secrets of Honey Valley", "Adventures of Petya and the Wolf" and "Monsiki". All episodes were dubbed into English.

The selection was based on the same criteria that were applied to the main program of the festival. In addition, the content had to have broadcast rights in 15 countries (Russia, Poland, Italy, Spain, Germany, France, Turkey, Russia, Korea, Japan, Israel, UAE, Saudi Arabia, Oman).

Easy Breezy was held on the landing page with the function of automatic translation into 104 languages. Novakid's signature colors were used in the design: crimson, yellow, turquoise and purple. 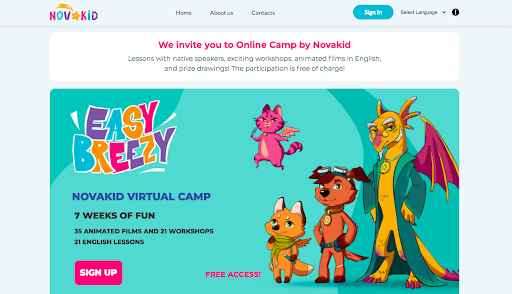 On the main page, visitors could learn about the general principles of the camp and get acquainted with the program of classes. Access to the content is provided only after registration. Every week a new block of activities was opened, and after seven days it went into the archive. Lessons and master classes in the archive blocks remained open for viewing. But the showing of cartoons, by agreement with the copyright holders, was no longer carried out.

To promote Novakid, a banner was also placed on the landing page with an offer to register for a free trial lesson.

In addition to Soyuzmultfilm, the partners of the virtual camp were the manufacturer of Haribo marmalade, the company ELARI which produces "smart" electronics. They provided prizes for the winners of the draw held throughout the camp. Information support for the project was provided by the social networks VK and Likee. As well as the radio station “Children's Radio" and the Cartoon Network TV channel.

The promotion of the online camp in different countries was carried out by local marketing agencies. Promotion channels and tools varied depending on the country.

In the course of the project, a general press release was created, seven announcement releases with the camp program for each week.

In Russia, the publications and portals Letidor, Woman, OSD, Pretest and Kinoafisha, Delovoy Kvartal, BabyBlog and National Geographic became the information partners of the project.

In Italy, Radio Mamma and the Quimamme portal acted as information partners.

Cooperation with bloggers in Russia, Germany and South Korea

In the format of video clips on Instagram, the influencers shared with the audience their impressions of their children's classes at the camp.

The target was used in Russia, Poland, Spain, Italy, Germany, France and Turkey.

Placement of banners on the websites of information partners in Spain, Italy, Turkey and Russia.

In Russia, the Easy Breezy banner was on the homepage of the Home and Children's Radio portals. In Turkey banners were placed on HT Hayat, HT Magazin and Haberturk.com. Banners were also placed in online publications in Spain and Italy.

The project was announced with the help of short promo videos in the Likee and TikTok applications.

Cooperation with the VK social network

The social network, as part of information support, organized the targeting of six videos and audio advertising of the festival.

Audio advertising in Russia and Germany

In Russia, an audio clip advertising the camp was broadcast by Children's Radio. From July 12 to August 1, the video aired 100 times in each of the 35 broadcast cities. In Germany, audio ads were broadcast on Radio Teddy (5 cities) for four weeks.

Instagram Facebook and Instagram accounts of 28 regional pages of Novakid were actively used to promote the camp. The main attention was paid to the announcements of the weekly program.

In addition, all Novakid students received a notification in their personal account with an invitation.

For additional promotion, sweepstakes were held on social networks. Throughout the project, camp participants posted photos and videos of crafts created at master classes on social networks with the hashtags #EasyBreezy_Camp and #Novakid. According to the organizers, the authors of the brightest works were given prizes from the project partners. 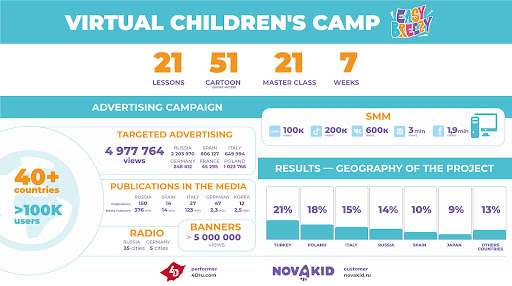