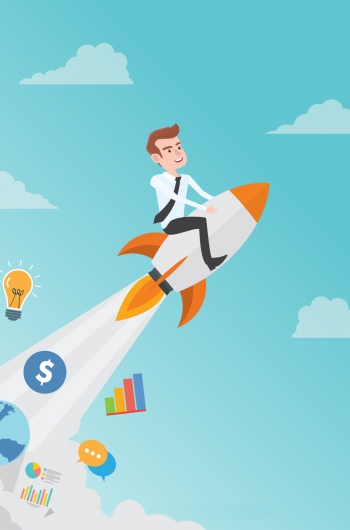 In 2014, for the first time in the history of the Russian startup Luca led by former editor of Afisha magazine Yevgenia Kuida became a participant in one of the most prestigious business incubators in Silicon Valley – the legendary Y Combinator. Every year, more than 30,000 companies from all over the world submit their applications but only 100-200 are selected and enter the program. YC has grown companies like Airbnb, DropBox, Reddit and many others. The accelerator invests a small amount for development but more importantly, it is a sign of quality for investors from all over the world. Luca an app that helps users choose restaurants using machine learning technologies has sparked widespread discussion in the startup community, according to Wired and TechCrunch. Getting into Y Combinator helped Yevgenia Kuida attract more than 4.5 million investments from several American funds and become a pioneer among Russian technology startups conquering the United States. In the following years, every set of prestigious American accelerators 500 Startups and Y Combinator includes Russian founders: Wakie, Chatfuel, EasyTen, Visabot, Coub, and many others.

The majority of Russian founders of startups do not consider Russia as a key market. The reason is simple: the volume of the Russian market does not allow it to grow exponentially, and the consumer opportunities of the population are strongly losing to the West and the United States. For many Russian founders, entering the American market becomes a primary goal: if you show results in a highly competitive market in the United States, it is almost guaranteed success on the way to international expansion.

But entering the American market requires significant money. According to Maxim Chebotarev, head of the FRIA investors club and co-owner of Techmafia-California - based equity free soft landing program, a full launch in the US costs the company about $ 1 million. This money is spent on relocation, legal expenses, accommodation, team building, hypothesis testing, and marketing. But, as a rule, early-stage funders (Preseed and Seed) do not have even half of the amount announced by Chebotarev, so the issue of attracting American investment is often primary. Here's what Dmitry Zaruta, a graduate of 500 Startups accelerator, says About finding investments in the US: "Attracting investment is selling a stake in your company. Sales are usually divided into B2B and B2C. Since your company is a business, and the investor is a professional (if not, run away) who wants to make money on your company, then attracting investment can be classified as a typical B2B sale. A ton of literature has been written on this topic, so I will focus on a few distinctive moments of fundraising in the United States:

1. All investors are on LinkedIn. Buy a PRO account — it will pay off.
2. For the Pre-Seed round (the earliest stage of the startup is a prototype or the first revenue), B1 – B2 visa is sufficient; for later stages, O1, L1, H1B will be required.
3. A good entry into the market will be participation in one of the top accelerators (Y combinator, 500 Startups, Tech Stars).
4. Your company must be registered in the state of Delaware (the lowest tax and you do not need to be a resident of the state or even the country to be a shareholder, Director or top manager of the company) and have the legal status of C-corp (your startup must belong to the shareholders who bought the company's shares).
5. When communicating with an investor, remember: everything that is not "Yes" is a polite "No". If they want to invest in you, you will definitely feel that they are selling themselves to you. If this is not the case, don't waste your time and move on.
6. Do not ask for an Intro (to arrange an introduction) to an investor from an entrepreneur whose company this investor did not earn money from. Especially do not ask for an Intro from an investor who refused you.
7. Raising a round in the US is a full-time job for one of the funders for at least six months. Be prepared for this.

Not all Russian companies manage to raise prices in America. So, in the spring of 2018, Maxim Kolpakov, the founder of the Wachanga app for young mothers, armed with a pitch deck (a presentation about a startup) and growth indicators, went to conquer investors in Silicon Valley. After spending 2 months in California, meeting daily with potential partners, Maxim has not yet managed to attract American investment. "The main barrier for early stage investors is that we are not Americans. If you don't have an impressive technical advantage, investors will prefer local players. In order to become a "friend" in Silicon Valley, it is important to move there for at least six months and develop a network”.

Maxim Chebotarev agrees with this idea: "In the US, you need to change the positioning from "Russian company" to "global company", in fact, everyone does not care where you are from - the main thing is what kind of product you make. An important factor for success is publication in the media, and, depending on the goals, in different ones. Getting into the prestigious TechCrunch can help with investment searches, but will give zero results in terms of B2C and B2B sales. At the same time, the more publicity you have in American media, the higher the credit of trust among all market participants: there are a lot of startups and the first filter is a Google search for news. In emails to partners and clients, it is customary to add "here are links to publications about us in the media".
Choosing the right Agency to bring to the American market is a key task for the founder. The price of an error can be very high. We are aware of a startup that has hired a Russian PR specialist from Silicon valley to help implement its media launch strategy. Founder dreamed of TechCrunch, the contract had a separate clause for target media, and the price of services exceeded 100 thousand dollars. As it turned out, the PR specialist came up with a clever move: she paid for commissioned articles on a given topic to contributors, and did not work with journalists and editors of target publications. Formally, there were publications, everything looked beautiful in the reports, but in fact-views rarely exceeded 5 thousand people, instead of the standard for the editorial material TechCrunch 600 thousand - 1 million views.

Artem Goldman, a Russian entrepreneur who is on the Forbes "30 Under 30" list and the founder of such startups as Visabot and Legal Space, does not like to remember his experience working with PR agencies in the United States: "We hired an Agency on the recommendation of friends, spent 30 thousand dollars, and got nothing. As a result, we lost money and time and did everything ourselves".

What should Russian startup founders do to achieve their business goals using effective PR in the United States?
According to Natalia Belkova, Head of the 4D Agency in Russia (Saint-Petersburg): "Entrepreneurs are constantly in short supply of time. It is a difficult task to study the market, offers, conditions, and set goals in different time zones, and often even the language barrier. After all, you need to find time to work with foreign consultants. But in our experience, this can be entrusted to a Russian partner who will take over the communication function. This can be done through local representatives of international associations. One of the examples that we are close to is the global PR Association GlobalCom PR Network which unites 70 offices around the world, including in Russia. Network representatives can be fully responsible for providing quality services with partners in any market, including the United States and China. This means that you can communicate with the Russian representative office, jointly develop a strategy and set goals, and not waste your time on understanding the peculiarities of the local mentality”.

A successful PR case developed by a quality Agency solves a number of strategically important tasks in the field of positioning, forms an attitude and helps to achieve business goals. For example, the story of SimpliVity Corporation , a private company that spent four years in stealth mode. The company provides simplified IT infrastructure solutions for the virtual environment. Companies Smart Connections PR ("Smart") it was instructed to organize and launch a PR campaign to get the company out of this mode.

What is one of the main reasons for such a successful campaign? Everything was very precisely planned in advance: carefully selected target publications, the company's activities were covered in the media where it was really important. Most of the articles were published in media outlets such as the WSJ, Dow Jones, InformationWeek, Computerworld, CRN, and the Register. The publications contained company news, market trend analysis, expert opinions, and product images.

Joanne Hoag, co-founder and partner of Smart Connections PR: "We study very deeply the startups we work with, develop a communication plan with key journalists and the media in General. We develop a key message that describes the main value of our clients work in the market. Relationships with journalists, quality pitches and knowledge of target media are key elements of an effective PR campaign".

Every year, thousands of startups from Russia try to conquer the American market, but only dozens achieve positive results. Before you decide to expand, think about whether you understand the market well enough and if you don't, will you be able to find those who do?