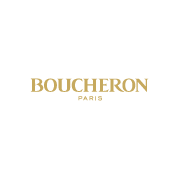 The House of Boucheron is a French family dynasty founded by Frederic Boucheron in 1858, with the opening of his first store in the Galerie de Valois, at Palais-Royal, during the heyday of the Second French Empire. He created his atelier in 1866 and a year later won the Gold Medal during the Exposition Universelle (1867).

In 1893, Frédéric Boucheron became the first jeweller to move to Place Vendôme. Legend has it that he chose 26 Place Vendôme, where Boucheron remains to this day, because it was the sunniest corner of the square.[citation needed] He believed that the diamonds in the windows would sparkle all the more brilliantly.

In 1893, Boucheron opened a store in Moscow, later transferred to Saint Petersburg in 1911. In 1903 a store in London and an office in New York. More store openings followed in Japan in 1973, Shanghai, Dubai in 2005, and finally Hong Kong and Kuala Lumpur in 2006.

Boucheron was a family business : after the death of its founder Frédéric Boucheron in 1902, his descendants took over the business. In 1994, the family business shifted to a more global approach with its selling out to Schweizerhall.

The House of Boucheron was then acquired by former Gucci Group in 2000,which was bought by PPR in 2004. Pierre Bouissou was appointed CEO in April 2011.

In 1878, the Russian Prince Felix Youssoupoff purchased a corsage decorated with 6 detachable diamond bows during one of his visits to Paris.

In 1921, Boucheron was commissionned to make a tiara for Lady Greville which was later given to Queen Elizabeth The Queen Mother.[4] Her grandson Prince Charles passed the tiara on to his wife Camilla, Duchess of Cornwall.

Queen Elizabeth II also has a collection of Boucheron jewels.

In 1928, the Maharaja of Patiala asked Boucheron to set the stones of his treasure, which were brought to the Place Vendôme boutique by the prince.

One of the first line created was the symbolic snake line in the 1970s.

Solange Azagury-Partridge was appointed Creative Director in 2001, she held the position for three years. 2002 saw the launch of the "Beauté Dangereuse" and "Cinna Pampilles" collections, "Not Bourgeois" launched the following year.

In 2004, the "Jaipur" High Jewellery line and the "Déchaînée" collection are launched.

2005 is a very creative year for the House of Boucheron : the "Trouble", "Quatre", "Diablotine", "Vingt-Six" and "Trouble Désir" jewellery lines are launched.

In 2010, Boucheron unveiled a colorful jewellery range to enhance its "Cinna Pampilles" collection.

In 2011, the "Cabinet of Curiosities" line was launched.

In 2006, Boucheron and Alexander McQueen collaborated to create a limited-edition Novak bag that incorporates the snake motif of Boucheron's Trouble line.

The beginning of a collaboration between Boucheron and Swiss watchmaker Girard-Perregaux started a year later in 2007, amongst which feature the LadyHawk Tourbillon and the limited Boucheron tribute watch.

In 2010, Boucheron and MB&F launched the HM3 JwlryMachine timepiece.

It has 34 boutiques worldwide and an on e-commerce website launched in 2007. Claire Choisne was appointed Creative Director in 2011.The company's estimated sales (in 2010/2011) were €50 million in total sales and €5 million in watches.

Boucheron makes watches, and jewellery, and licenses it's marque for perfumes. The watch and jewelry making segments have existed for over 150 years. The first fragrance "Boucheron" was launched in 1988, over 22 men's and women's fragrances have been released. Since 2011 Boucheron fragrances have been created, produced and distributed under license by Interparfums

Boucheron has compiled a classification system by which to determine the value of a diamond, developed on the basis of the diamond's international currency. The Boucheron method of appreciation has been registered under the name B.I.R.D. (Boucheron International Rating of Diamonds). This original classification system is based on an evaluation of diamond quality and relies on a combined analysis of two criteria: first, the degree of clarity and second, the colour of the stone. The point at which these two variables, "clarity" and "colour" intersect gives rise to a mark of appreciation of between 90/100 and 99/100 for the quality of the diamond. A mark of 100/100 would indicate that a stone possesses the ultimate degree of perfection, according to Boucheron's criteria.

In a joint venture with the mobile phone brand Vertu, Boucheron created the world's first High Jewellery limited edition cell phones out of gold and precious stones. This collaboration continued with the 150th anniversary celebration with a new line of 7 Vertu mobile phones inspired by Boucheron's High Jewellery "Enchanting Boucheron" anniversary collection. There are only eight pieces of the Cobra model in rose gold set all round with rubies and a pear-cut diamond and emerald eyes. Entwined around a rose gold case, the Python model, a serpent set with multi-coloured sapphires, diamonds and two sapphires, will be brought out in 26 pieces, as a reference to the famous jeweller's address, 26 place Vendôme.

For Boucheron we did: